At 7:00 p.m. the Spring Event began, again under Rachel’s direction.  The Spring Event is held during World Conference, allowing interaction with many visiting JWHA members.  This year the JWHA Board elected to switch the traditional banquet format with a more open event, requiring no registration fee.  Members invited family and friends to accompany them.

JWHA has been honoring Founding Members in our past few conferences in Nauvoo and Blue Springs. To complete the official recognition, Sherry Morain Skyped with Alma Blair, now of Johnston, Iowa. Sherry read a framed tribute to Alma, outlining his profound contributions to JWHA through the years. Many in the audience remembered fondly that Alma had served as one of their first professors at Graceland.

Peter Judd then stepped to the microphone as moderator of a panel addressing the topic: The Unique Place of JWHA in Restoration History. Mark Scherer, Barbara Bernauer, and Bill Russell offered personal reflections on the history of JWHA. The floor was then opened to the audience for questions and comments on JWHA’s influence in the telling of Restoration history. 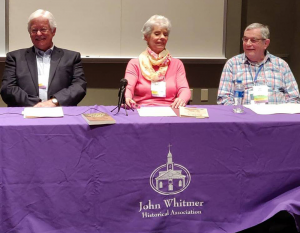 Jill Brim then discussed the benefits of JWHA membership, including:

* Participating in JWHA annual conferences.  This year’s conference will be in Fairport, New York, a cozy suburb of Rochester, located just 20 minutes from historic Palmyra.

The meeting was followed by light refreshments and conversations amongst all attendees.