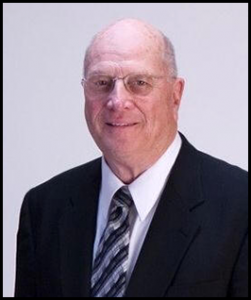 On Friday, April 26, 2019, Frederick (Fred) Niels Larsen, loving husband and father of five children, passed away at the age of 87 at home with his family.

Fred was born on January 15, 1932, in Kansas City, Missouri, to Edward J. Larsen, a Danish immigrant, and Lois A. Larsen, daughter of Frederick M. Smith. Fred was married on June 7, 1952, to Mary Louise (Mary Lou) Malott, the love of his life for the last 66 years. They raised three sons, Larry, Brian and Stephen (Stevie), and two daughters, Luann and Linda. As a young boy, Fred’s family moved to a 20-acre homestead in East Independence.

Fred held a series of notable professional positions. He retired from Bendix as a polymer chemist after 35 years of service. During his time there he served as a consultant in the field of polymer science at the Lawrence Radiation Laboratory in Livermore, California. After retirement, Fred began another adventure with the City of Independence Police Department’s Crime Scene Unit as a forensic chemist, where he established the illicit drugs and methamphetamine labs for the Jackson County Drug Task Force.

As a descendant of Joseph Smith, Jr., Fred has always had a close association in the church. Fred was blessed and confirmed by his grandfather, Fred M. Smith; ordained to the office of Priest in 1956 by Israel A. Smith, his great-uncle; ordained to the office of Elder by W. Wallace Smith, his great-uncle; and Fred and Mary Lou received their Patriarchal Blessings by Elbert A. Smith, a second cousin. In a call to gather the saints into what became the Remnant Church of Jesus Christ of Latter Day Saints (Remnant Church), Fred was one of the twelve signers of the Proclamation and Invitation to the Faithful, which led to the creation of the Remnant Church on April 6, 2000. In April 2002, Fred was chosen to become the President of the High Priesthood of the Remnant Church. Fred provided leadership to the Remnant Saints and the church and helped prepare for building the Kingdom of God on this earth.

In his personal time, Fred engaged in various hobbies that reflected his passion for sports, science, the outdoors, music and travel. Fred participated in high school football, college tennis at Graceland College and most recently golf with anyone who would get out and enjoy it with him. His favorite sport was watching his kids and grandkids in whatever sport or activity they participated at the time. Fred loved music of all genres and frequently played the piano, guitar, banjo and the harmonica just to name a few. Fred loved the adventure of spelunking (cave exploration) and studying and collecting rocks of all kinds. Fred was an active member of the Boy Scouts of America Tribe of Mic-O-Say and led Scout Troop 257 on their annual Big Adventure trips to explore the Collegiate Peaks, a section of the Sawatch Range of the Rocky Mountains, located in central Colorado, a place his grandchildren still enjoy. Fred and Mary Lou loved to travel, especially to Hawaii, where they visited annually and shared with family and friends.

Fred was preceded in death by his father, Edward, his mother, Lois, and his step-mother, Margaret.