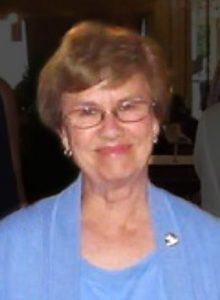 There has been a lot of talk in the news lately about “the other.”  The Other is anyone who is not us.  Right now a few policy-makers in the federal administration insist that the frightened folks coming to our southern border are The Other.  They are not us; sometimes they are not human; certainly they are not our kind, according to these esteemed lawmakers and administrators.

Think of all The Other: the menstruating girls and women in Nepal; the Roma in Italy; the Syrian refugees in Europe; the Macedonians in Greece; the Rohingya in Myanmar.

Since this essay is for a history association, specifically the history association addressing the story of my own faith community back to 1830, I have been giving thought to our relationship with The Other.  We were birthed in an atmosphere of The Other, i.e., the other churches are not us.  We are the one true church.  We are not like all the others.  At one time we were not The Mormons—The Other for whom we had a unique antipathy.

There were a few who did not run away, who for a while mingled with their communities without losing their identity, and who then met up again under their new leader to reorganize and to reassume the strength in their identity.

My research for this September’s Presidential Address has involved reading so many documents both by and about my father.  He was a man who very seldom spoke of The Other.  (Exceptions were those he called Clever Devils, such as Joe McCarthy, who turned truth on its head and reality upside down.)  Although he believed that we were the one true church of Christ on earth, his behavior did not involve setting us apart from the world.  He joined the Independence Ministerial Alliance when others thought that was anathema.  He welcomed the Baptist congregation and their school children into the Stone Church when their building burned and they needed temporary quarters.  He called at least one to the priesthood when he thought to include him in the fellowship rather than to deny him.

So, this is both a contemplation of the role of The Other in our church history and a preview of things to come in September.  I’m looking forward to seeing you all.

Join us for Trivia Night.

Changes to the bylaws.

Purchase a Full Set of the JWHA Journal.

The 2018 annual conference registration is open.

Issue No. 111 Table of Contents 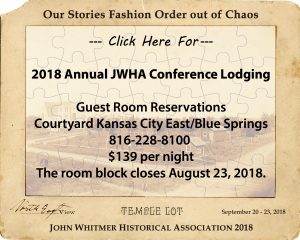 Amazon will donate 0.5% of the price of your eligible AmazonSmile purchases to John Whitmer Historical Association whenever you shop on AmazonSmile.